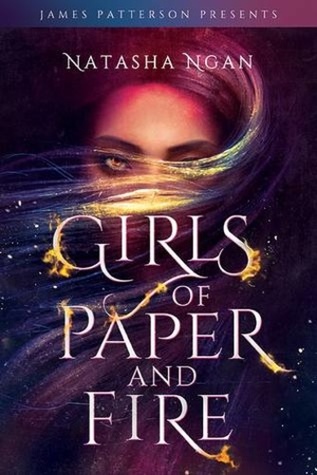 Each year, eight beautiful girls are chosen as Paper Girls to serve the king. It’s the highest honor they could hope for…and the most demeaning. This year, there’s a ninth. And instead of paper, she’s made of fire.

In this richly developed fantasy, Lei is a member of the Paper caste, the lowest and most persecuted class of people in Ikhara. She lives in a remote village with her father, where the decade-old trauma of watching her mother snatched by royal guards for an unknown fate still haunts her. Now, the guards are back and this time it’s Lei they’re after — the girl with the golden eyes whose rumored beauty has piqued the king’s interest.

Over weeks of training in the opulent but oppressive palace, Lei and eight other girls learns the skills and charm that befit a king’s consort. There, she does the unthinkable — she falls in love. Her forbidden romance becomes enmeshed with an explosive plot that threatens her world’s entire way of life. Lei, still the wide-eyed country girl at heart, must decide how far she’s willing to go for justice and revenge.

Full Asian cast young adult book? PLEASE, take all my money on it. Reading the synopsis, I never thought this book would be darker than I expected. This book is about sexual assault, rape survivors and how society see it as something normal. I want to thank Natasha Ngan for bringing such an important topic, it’s a good story and it brings awareness about this particular topic.

This book is about social caste that still lives among us right now. People will treat someone who is different from them (eg: different skin tone, different race, different social status) rudely, like they’re superior to other people. In the kingdom of Ikhara, the caste is divided into three; Moon caste (animal-demon in humanoid form), Steel caste (human-demon creature) and Paper caste (human). Moon caste is above other castes and many creatures look down at human—simply because they’re human. Paper caste were enslaved in Ikhara, not to mention that the Bull King himself requires 8 Paper caste girls to serve him for a year. Looking at it, it’s not so different with the world we live after all.

I was so taken away with the world building Girls of Paper and Fire has. Ikhara is a place with mysterious magic that still holds a strong traditional beliefs. These cultures, traditions and beliefs are all inspired with Asian cultures; the perfect merging of various customs all around Asia. Each person Lei met bring me more knowledge about how the caste system works in Ikhara. The girls came from different places in Ikhara; they introduce me to their background and beliefs. It’s really fascinating, I can’t be happier knowing a YA fantasy has a good Asian culture representation.

Okay, so the romance. Yeah, about that. Listen… I love them. Very much. Natashan Ngan treated Lei and Wren with so much normalcy. The diversity this book has feels so real, unlike some books who use diverse characters for no real reason but to gain more readers. Lei’s and Wren’s relationship is beautiful and sweet; it’s about bravery and sacrificing, it’s about healing and vulnerability. It’s a slow burn with excellent intimacy.

But, if you’re looking for all-action fantasy book, I don’t think this book is for you. This book is so focused on the world-building and developing each characters, so the real action happened in the few chapters at the end of the book. The rest is just events after events following the big action—which is a little bit boring for me. Lei was left in the dark about what’s actually going to happen, despite being the main protagonist. Personally, this book would be so much interesting if Wren is the narrator. After all, she’s the key.

Will I recommend it to you? YES.

And we’re done for the day! I still have few books to be reviewed (since I went MIA last week) so bear with me—I will posting the reviews more often that I used to. What about you guys? What’s your opinion about Girls of Paper and Fire? Anyway, don’t forget to subscribe to my blog and follow me on Twitter (@vasyamorozkos) for a little chit-chat or add me on Goodreads to see what I’m currently reading! See you later!