Assalaam wa alaikum friends and welcome to Muslim Hours! Today I’m joined by Adiba Jaigirdar, author of The Henna Wars, a young adult book about two girls rivaling in henna business. The Henna Wars is one of my most anticipated releases this year and I’m so happy to have Adiba on my blog. When I first heard about The Henna Wars, I’m so delighted. There are not many books that discusses about LGBT in between Muslim peers and I want to personally thank Adiba for brought up the conversation to her book. I know I will love The Henna Wars and I’m sure you will too!

So, buckle up kids! Adiba and I are going to talk about the book and the characters. But before we start, here’s a little information about Adiba’s debut, The Henna Wars!

THE HENNA WARS
by Adiba Jaigirdar

When Nishat comes out to her parents, they say she can be anyone she wants—as long as she isn’t herself. Because Muslim girls aren’t lesbians. Nishat doesn’t want to hide who she is, but she also doesn’t want to lose her relationship with her family. And her life only gets harder once a childhood friend walks back into her life.

Flávia is beautiful and charismatic and Nishat falls for her instantly. But when a school competition invites students to create their own businesses, both Flávia and Nishat choose to do henna, even though Flávia is appropriating Nishat’s culture. Amidst sabotage and school stress, their lives get more tangled—but Nishat can’t quite get rid of her crush on Flávia, and realizes there might be more to her than she realized.

Hello Adiba! Thank you so much for joining me today and congratulations on your debut release! The topic you brought up in The Henna Wars is pretty sensitive, but it’s one of the topics I’d like to be explored more by people. So tell me more about your book and what inspired you to write it?

Hi Ikram! Thank you so much for having me! The Henna Wars is about Nishat, a Bangladeshi Muslim lesbian, whose parents don’t take too well to her coming out. At the same time, her childhood friend Flávia returns to her school. The two of them create rival henna businesses for a school competition, even though henna is not a part of Flávia’s culture. So, Nishat has to grapple with her parents’ disapproval, along with her fledgling crush and resentment towards Flávia.

The book was really inspired by henna. The idea came to me when I was visiting my grandmother in Bangladesh. I had bought a bunch of henna tubes and decided to try and teach myself henna. But I’m not great at any kind of visual art, so it didn’t quite work out. But it gave me the idea for two teen girls who compete against each other with rival henna businesses, and everything else kind of clicked into place after that initial idea.

I really love childhood friends to rivals to lovers. So, massive thank you for creating such a funny story. If it’s possible, can you give us one or two words to explain Nishat’s and Flávia’s personality?

I would describe Nishat as strong-willed and self-assured, and Flávia as creative and curious.

Like I said earlier, topic like LGBT in Muslim community is still a sensitive topic, as well as cultural appropriation because many people still ignore and pretend it doesn’t exist. With that reason, do you have any struggle or doubt while writing The Henna Wars?

Yeah, definitely. I know that both of these topics have not been explored a lot in media—if at all. I also know that these are both topics that a lot of people have very strong negative feelings about. There’s obviously a lot of homophobia in the world, and there’s also a lot of Islamophobia, and queer Muslims have to deal with both of those at the same time from both inside and outside of our communities. I guess, as much as I knew there might be backlash or the story might rub people the wrong way, I wrote it for the people who need a story like this.

In regards to the cultural appropriation plotline…growing up I definitely faced a lot of racism (and I still do) but I didn’t quite understand the roots of that racism, and it led me to wanting to detangle myself from my culture. Now I’m older and I’ve spent a lot of time studying colonial and imperial history around the world, so I know that cultural appropriation has a long and complicated history and is totally rooted in racism and the history of racism in the world. But so many people are still incapable of making that link, or even of noting the very real harm of cultural appropriation. In writing this book, I guess I just hoped that we could open a door to discussing cultural appropriation and its harms in all contexts.

Not just the readers, sometimes authors can learn something from writing their own story. Whether from the story itself or from the journey of publishing your book. So what was the biggest lesson you’ve learned as a debut author?

I’ve learned a lot! Probably the biggest thing I’ve learnt is patience. I’m a teacher so I have to be patient in certain contexts anyway, but it’s difficult to have patience in the publishing industry but you have to have a lot of patience for it. There’s a lot of waiting, and you just have to…deal with that. I think I learnt that!

To summarize our talk today, is there something you want to tell to your readers? We’d like to hear it!

I would just love to wish everyone Ramadan Mubarak and I hope that everybody is staying safe!

Adiba Jaigirdar was born in Dhaka, Bangladesh, and has been living in Dublin, Ireland from the age of ten. She has a BA in English and History, and an MA in Postcolonial Studies. She is a contributor for Bookriot. All of her writing is aided by tea, and a healthy dose of Janelle Monáe and Hayley Kiyoko. When not writing, she can be found ranting about the ills of colonialism, playing video games, and expanding her overflowing lipstick collection. She can be found at adibajaigirdar.com or @adiba_j on Twitter and @dibs_j on Instagram. 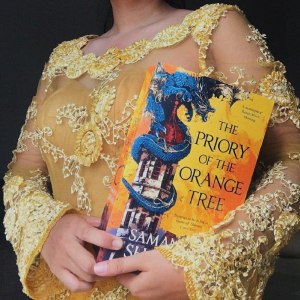