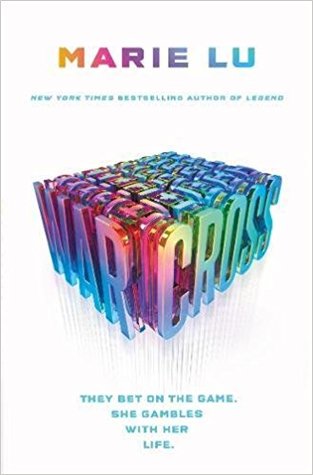 When a game called Warcross takes the world by storm, one girl hacks her way into its dangerous depths. For the millions who log in every day, Warcross isn’t just a game—it’s a way of life. Struggling to make ends meet, teenage hacker Emika Chen works as a bounty hunter, tracking down players who bet on the game illegally. When Emika hacks into the game illegally, she’s convinced she’ll be arrested, and is shocked when she gets a call from the game’s creator, the elusive young billionaire Hideo Tanaka, with an irresistible offer. He needs a spy on the inside of this year’s tournament in order to uncover a security problem … and he wants Emika for the job.

Have you ever felt betrayed by a book character? How do you even move on from that? Because to me, the ending of Warcross really made me questioning my feeling about this book. Am I betrayed? Yes, absolutely. Do I regret reading this book? No, why would I?

But on the bright side, after reading Warcross, now I want it to happens. A virtual reality game? I would spend my money on it, honestly.

It’s true, reading Warcross is truly magical. This is another reminder that technology is both beauty and cruel thing human have ever invented. Throughout the book, I found myself transported right at the Warcross game. It was a pleasant experience—reading this book. I was in awe at how advanced the technology Hideo Tanaka created. It was unreal, but somehow I knew something like Warcross would happen soon.

Emika Chen is not like your stereotype hacker; where they usually are a mysterious person with antisocial behavior—Emi is not any of that. Emi is selfless yet naive. Smart but reckless. She keeps her individualistic demeanor; thinking that she doesn’t need any help from people simply because she thinks she deserves it. Emi is a prime example of how naive a young teenager could be; from the moment she accidentally glitched herself to Warcross Opening Ceremony to her job in becoming Hideo’s personal hunter.

But, Emi is also someone who doesn’t need to get involved in martial arts to become a strong woman. She uses her intelligence and will to survive in Manhattan (and later Tokyo), she uses her brain to be her own power.

I love her for that.

Hideo Tanaka, on other hand, surprised me. I thought he’d be like those fictional boys where they own a big company and basically have power over the world. I thought he’s just some billionaire who is cold and distant toward everyone. I was wrong, of course. Hideo is much more than a successful billionaire or a creator of Warcross.

Hideo is not a bad person, but he’s not a good one either; he’s somewhere in between. People adore him, treat him like he’s a celebrity (well, looking back at it, I think he fits as a celebrity), but none of the attention and money are enough for Hideo. He seeks peace, he wants to make a better world for everyone—but in a wrong way.

And… the romance. I wish this book is only focused on the game and finding out who Zero is. The romance is unnecessary—and you heard it from someone who loves romance. Hideo and Emi look good together, yes, but really—their relationship is not something I would like to see. It feels… forced. Yeah, it feels forced. Like, for one second they just met and then suddenly they’re flirting? Nope.

I could barely put this book down because it kept my interest. It made me crave for more; to know what happened next and what action Emi would take. Marie Lu did excellent job by creating such an magical atmosphere. This book gives me The Hunger Games vibe, but it’s so much better than that book.

Overall, I like this book, but I don’t think I’ll put it as my favorite list. As I write this, I feel like to drop my current read just so I can continue to read Wildcard. One of my mutuals on Twitter said Wildcard will ruin me and honestly… I don’t mind.

Will I recommend it to you? YES.

And we’re done for the day!

What about you guys? What’s your opinion about Warcross?

Anyway, don’t forget to subscribe to my blog and follow me on Twitter (@vasyamorozkos) for a little chit-chat or add me on Goodreads to see what I’m currently reading! See you later!